Title: The Hunt For Red October

In almost every way that matters, watching the filmed version of potboiler-machine Tom Clancy’s debut novel is 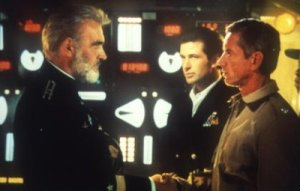 In the world of “Hunt for Red October,” the concept of American Exceptionalism wasn’t just an idea taught in high school history classes, it was a living breathing entity.

In 1990, the year this film was released, the Berlin Wall had fallen, Communism was crumbling across eastern Europe and the once fearsome Soviet Union was about to become the Boris Yeltsin-led Russian Federation, which would the next decade plus as our drunken, noisome cousin, who we worried more would barf on the furniture and leave its underwear on the door than shower fiery nuclear death upon an unsuspecting populace.

Directed by John McTiernan — whose past credits include the first, two movies of the seemingly unkillable “Die Hard” franchise, and, later, a remake of the “Thomas Crown Affair,” that, while not without its charms, failed to live up to the virtues of the Steve McQueen original — “Red October” belongs to a bygone age when Hollywood still made action films for grown-ups and smart people.

It didn’t take a degree in engineering and a nuanced understanding of international relations to understand the plot: Famed Russian Navy captain (Connery) steals cool, new sub that can run quietly and park a warhead in Times Square before anyone can shout “Borscht!.” Smart American CIA operative (last time that would be believable, too) played by Baldwin figures out what’s happening and tries to help him. The Russians, meanwhile (embodied by Skarsgard) try to stop him. Viewers on edge of seat for 175 minutes until the whole kit-and-kaboodle is resolved.

On the surface, it’s the standard chase flick, slapped with a coat of already peeling Cold War-era paint and shot through with some absolutely preposterous accents from the Russian sub crew (Connery, for instance sounds like a more walrus-y Connery, even if his character is Lithuanian).

What sets “Red October” apart from its cheeseball action-flick brethren, however, is its relentless focus on plot and characterization.

For the better part of two hours, there’s nary a wasted moment or useless gesture. The film sucks you in from its opening moments and keeps you there. For that, you can jointly thank screenwriters Ferguson and Stewart, along with Clancy, who may have later turned into a hack, but who, in his early novels was a master of the political thriller, where pacing is all.

McTiernan also assembled quite possibly one of the best casts in filmdom. At all points, the men of the film — and they’re all men, there’s nary a distaff character in sight — becoming a kind of fin-de-ciecle version of the “Magnificent Seven,” if the Seven spent all their time on naval vessels.

Baldwin, then still making his bid for matinee-idoldom, turns in an understated and sympathetic performance as Jack Ryan, the bookish CIA analyst-turned-reluctant hero.

The already larger-than-life Connery dominates every scene he’s in as the rebellious sub captain Marko Ramius, making what could have been easily become a caricature of character into one instantly relatable — he’s rebelling from grief over his dead wife.

But as is the case with all great stories, the amazing cast of supporting players lend the film a weight and heft it would not have otherwise had. Courtney B. Vance as the brainy sonarman Seaman Jones is indispensable, ditto for James Earl Jones as Ryan’s mentor, Admiral James Greer. Scott Glenn’s turn as American sub commander Bart Mancuso combines just the right amount of frontier swagger with the quiet confidence of a career officer, and who can forget Fred Thompson’s brief appearance as a Navy admiral (“The Russians don’t take a dump without a plan, son.“)?

All this happens because McTiernan was one of the last American directors to helm an actioner that didn’t allow the special effects and CGI to take precedence over character. The model submarines lumber convincingly through the murky depths of the North Atlantic, even when they’re being chased by clearly CGI’d torpedoes.

The transition to the brainless action flick came six years later with Roland Emmerich’s “Independence Day,” which marked the first time that human actors started taking a back-seat to the special effects. The trend has reached its apogee with the “Transformers” franchise. I may know that Shia LaBoeuf and Megan Fox star in the opening installments, but no one has convinced me that I should care about them.

Contrast that with the closing moments of “October,” where Baldwin and Connery share a quiet moment on the bridge of the captured Russian sub as it steams along some rural river in Maine:

“‘And the sea will grant each man new hope, as sleep brings dreams of home’ — Christopher Columbus,” Connery’s Ramius says.

“Welcome to the New World, Captain,” Baldwin’s Ryan returns, providing a stark reminder that you’d have to look long and hard to find historical allusions in most contemporary action films — even the ones that don’t purposefully set out to insult your intelligence.

I'm an award-winning journalist in Harrisburg, Pa. I also run and cook all the things.
View all posts by jlmicek →
This entry was posted in action, Alec Baldwin, Ourselves, Sean Connery, thriller. Bookmark the permalink.