A Look Back At “Quadrophenia.” And whatever happened to looking ahead?

Two weeks after Britain erupted into the worst riots in a generation, The Guardian takes a look back at the 1979 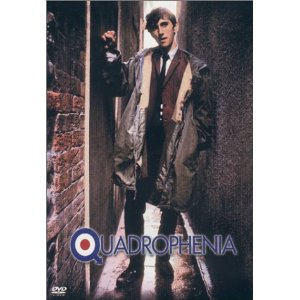 filmed version of The Who’s “Quadrophenia” and finds it eerily prescient.

“Back in 1972, Stanley Cohen concluded: “The intellectual poverty and total lack of imagination in our society’s response to its adolescent trouble-makers during the past 20 years, is manifest in the way this response compulsively repeats itself and fails each time to come to terms with the ‘problem’ that confronts it.” Quadrophenia is a striking and evocative reminder of a bygone age when Britain was … well, basically exactly the same as it is now.’

For me, though, the movie raises another interesting question: Whatever became of the youth cult?

From Teds in the 1950s to Punks in the 1970s to 1980s New Romantics and even the grunge adherents of the 1990s, every decade of the rock era has been marked by some vast movement that’s brought with it a seismic wave of change and reinvigorated the form.

The Who spoke for their generation and The Clash captured the rage of the Notting Hill riots in the 1970s. And for a lot of people my age, Kurt Cobain’s Nirvana still remains a musical high water mark. But who speaks for today?

I suppose you could argue that the advent of hip-hop also brought with it a brand-new youth culture, one that did not include skinny white kids with guitars. And perhaps the rise of dance music and the bedroom musicians of chill wave also represent a movement in itself. But all these seem peculiarly niche-y, without the wider cultural impact of earlier tidal changes. Blame the fracturing of culture brought on by the Web. With a greater array of choices comes a loss of unanimity of sentiment.

In his book “Retromania” released earlier this year. critic Simon Reynolds argues that pop culture has stopped advancing and is now simply content to cannibalize earlier sounds and sights. Adele’s “Rolling in the Deep,” may be a great tune, for instance, but it’s just a few steps removed from Ronnie Specter. And why on Earth is Hollywood rebooting “Spiderman” barely a decade after the first movie hit the theaters?

It’s been the history of pop culture that great movements come out of times of great unrest — from the Vorticists of the pre-World War I era to the Moderns who followed the Great War, right on down to the Mods of the 1960s youth riots and the punks who followed.

With the exception of Green Day releasing “American Idiot” at the height of the Iraq War, I can’t think of another record or film that’s encapsulated or captured the unease of the times we live in now. You can make an argument that we’re in economic times as unsettled as any since the 1930s. But where’s the artistic revolution in film, music or literature that’s accompanied that time of upheaval?

It seems, instead, that we’re more comfortable in these times to retrench, to take comfort from what gave us joy when times were good, rather than taking the angst and uncertainty and creating something new.

And that’s too bad.

I'm an award-winning journalist in Harrisburg, Pa. I also run and cook all the things.
View all posts by jlmicek →
This entry was posted in Film News, Our Films, Ourselves, Thinking About Movies and tagged American Idiot, Green Day, Quadrophenia, Sting, The Clash, The Sex Pistols, The Who. Pete Townshend. Bookmark the permalink.