A truly disturbing report and a reminder that there is more than one film business in California (via The L.A. Times).

“An adult film performer has tested HIV-positive, prompting a temporary shutdown of productions across the Los Angeles area 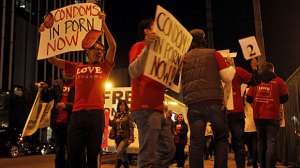 until further testing is completed.

Duke’s group became aware of the possible HIV case Saturday. Duke would not say how her group learned about the case and did not release the name, age or gender of the performer, citing medical privacy laws.

She said she notified adult film production companies Monday morning that a performer had tested positive and urged them to temporarily halt productions until further tests were completed.

All the company officials she spoke with, including those at well-known studios such as Hustler Video and Evil Angel, agreed to the temporary shutdown, she said.”