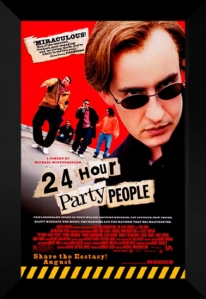 Winterbottom’s “24 Hour Party People,” traces the story of the late Tony Wilson, the charismatic British rock impressario, who, from the late 1970s through the early 1990s, helped briefly make his hometown of Manchester (if the hipsters are to be believed) one of the coolest cities on Earth.

Brought to life on film by the manic and floppy fringed comedian Steve Coogan, the movie follows Wilson (who died in 2007) as he becomes the brains behind Manchester’s legendary Hacienda club, boss of the equally legendary Factory Records and discover/enabler of two bands that have achieved mythic status among a certain strain of the rock cognoscenti: Joy Division and New Order.

The movie opens with Wilson’s attendance at The Sex Pistols’ 1976 gig at Manchester’s Lesser Free Trade Hall. In one of many asides to the camera, Wilson confides that most of the 42 people in attendance will go on to form bands.

Indeed, members of the emergent Joy Division, The Buzzcocks and even 80s soul crooners Simply Red are in the crowd.

Also in attendance is the mercurial Martin Hannett — the troubled and doomed producer who would help commit what later became known as the “Madchester” scene to vinyl. He’s given form here by actor Andy Serkis (Lord of the Rings, Rise of the Planet of the Apes), in a rare appearance that does not involve a motion-capture performance.

From there the film plunges into a breakneck chronicle of what was, admittedly an astonishing flowering of arts and music in the northern industrial city. At the center of all of it is Wilson, cutting an anarchic swath through events in which he participated but did not always seem to control.

Winterbottom, whose previous films include the hypersexual “Nine Songs (2004)” and the 2007 tale of slain Wall Street Journal reporter Daniel Pearl “A Mighty Heart,” lends realism to the proceedings by merging his own footage with archived newsreels. The grainy, cinema verite effect brings to life events that now seem distant and almost mythic to fans.

If the film has a cardinal failing, it’s that Coogan’s Wilson almost seems too much at the center of events. Ironically, the real-life Wilson also seemed to harbor a similar unease.

Despite his godlike status, he never gave up his day job as a reporter/host at Manchester’s independent Granada TV channel, as if he were hedging his bets against an inevitable implosion. In fact, one of the film’s funniest scenes finds a disbelieving Wilson (barely disguising his contempt and sharing it with the folks at home) hosting the UK iteration of “Wheel of Fortune.”

To be sure, Wilson played a role in bringing Joy Division, New Order and The Happy Mondays to life, but the reason the scene endures is because of the music they produced. Wilson’s midwifery, while critical, is not the singular fact of their collective existences.

And even though it was released five years earlier, “24 Hour Party People” serves as a technicolor bookend to Anton Corbjin’s 2007 Joy Division biopic “Control.”

While the latter film was shot in black-and-white, which was appropriate to the post-punk band’s bleak and icy soundscapes, “24 Hour Party People” explodes with the color of the ecstasy-driven “Madchester” scene for which Wilson’s epically money-losing Hacienda club served as the locus.

Ultimately, “24 Hour Party People” succeeds when attention is shifted away from Coogan’s Wilson (admittedly a huge task given the outsized personality involved) and onto the music.

Still, Winterbottom’s occasionally uneven effort does serve as a reminder that Wilson and the others like him whose energy and enthusiasm helped bring critical musical movements to life, is a vanishing breed in this age of blogs and splintered micro-movements.

And as a document of a crucial time in rock history it is a success, even if it falls short as a coherent work of art.