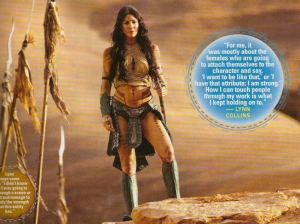 Here’s your first look at the leading lady in the upcoming big-screen adaptation of Edgar Rice Burroughs’ classic pulp hero.

… Collins was brilliant in Hugh Jackman’s Wolverine spin-off in the X-Men franchise, and I’m really looking forward to seeing them reunited on the screen for this. (Granted, they didn’t share any screen time in Wolverine, to the best of my recollection, but still.) Along with Kitsch and Collins, the film will star Willem Dafoe, Mark Strong, Bryan Cranston, Dominic West, James Purefoy, Thomas Haden Church, and Ciarán Hinds.
John Carter is set to be with us in 3D on 9th March next year, which means we’ve got less than three months before we see this all unfold on the big screen. I have a feeling it’s going to be pretty epic.”