An Appreciation: Composer Robert B. Sherman. 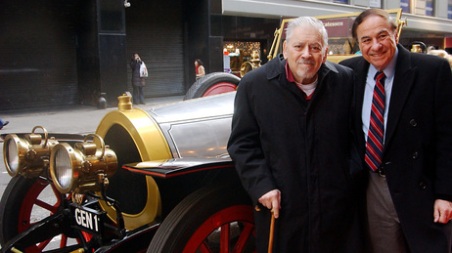 If you’re a parent who’s ever taken your child to Disney World or Disneyland, and, let’s face it, that’s most of us, then you’ve no doubt wished mightily that the Mouse served alcohol before hopping on the “It’s A Small World” ride.

The cloyingly sweet song, sung in every language known to man as canal boats slowly slink through the garish, multicolored ride, is the mother of all earworms. Once it’s in your head, it’s nearly impossible to get rid of it.

One half of the composing team responsible for the song, Roberrt B. Sherman, was only too aware of his creation’s capacity to annoy. And in an interview with National Republic Radio a few years back, he apologized, laughingly noting that he wasn’t sure if parents wanted to thank him or kill him.

This morning, I learned that Sherman had died at the age of 86. So as much as “It’s A Small World” drove me crazy when I took my daughter to Disney World during the Thanksgiving holiday in 2010, I just wanted to take a minute to thank him for making the world a little bit better with the music he wrote with his brother Richard.

The two siblings with the Tin Pan Alley pedigree were responsible for some of the best-loved Disney songs, including “Supercalifragilisticespialadocious,” “The Aristocats” theme and the “Winnie the Pooh” theme.

In that NPR interview, Sherman recalled the birth of “A Spoonful of Sugar,” from Mary Poppins:

“Robert’s son had just been given the polio vaccine.”I said, ‘Oh, did it hurt?’ ” Robert remembered. “He said, ‘Oh, no — they just put some medicine on a lump of sugar and you eat it. Nothin’.’ “

A lump of sugar.

“Next day,” said Richard, “he came into the office and he said, ‘I think I’ve got a title.’ I said, ‘What is it?’ ‘Spoonful of Sugar Helps the Medicine Go Down.’ I said, ‘That is the worst thing I have ever heard in my life!’ Of course, I snapped out of it right away. I said, ‘No, no, no, it’s absolutely fantastic, it’s great, it’s great, let’s do that!’ “

The songs were cloyingly sweet, there’s no doubt about it. But they have an undeniably tunefulness and a kind-heartedness about them that can force a smile from even the most cynical among us.

Here’s one of my long-time favorites, the “Winnie the Pooh” theme:

So rest in peace, Mr. Sherman. I just hope the “Small World” theme wasn’t playing when you got to the other side. I wouldn’t wish an eternity of that on anyone.

I'm an award-winning journalist in Harrisburg, Pa. I also run and cook all the things.
View all posts by jlmicek →
This entry was posted in Family Films, Film News, Our Films, Ourselves and tagged Disney Music, Robert B. Sherman, Winnie the Pooh Theme. Bookmark the permalink.