The Weekend Box Office and Your Monday Must-Read. 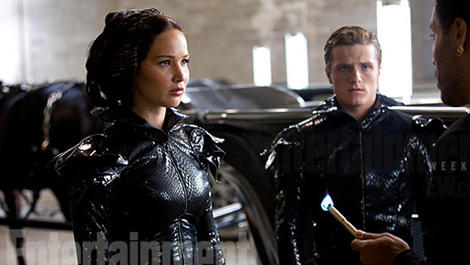 No surprises here. These aren’t the ‘droids you’re looking for, etc, etc. The Hunger Games continues to devour, consume, chow down upon and go all nom, nom, nom on the domestic box office.

The runaway hit took in $21 million, putting it atop the box office heap for the fourth weekend running. The Farrelly Brothers‘ unexpectedly warmly received “Three Stooges” revamp finished second, while Joss Whedon’s “Cabin in the Woods” took third place honors. And it may have been the centenary weekend for the sinking of the Titanic, but the hearts of film-goers did not go on for the 3D re-release of James Cameron’s 1997 hit. It finished fourth.

From BoxOffice Mojo, here’s the weekend, by the numbers:

Speaking of Joss Whedon, the New York Times profiled the filmmaker in Sunday’s editions, looking ahead to the May 4 release of “The Avengers.” What’s that? You didn’t know there was a superhero movie coming out? You must have missed the subtle publicity campaign for it.

With a cast overflowing with stars like Robert Downey Jr. (who reprises his role as the reckless billionaire Tony Stark and his alter ego, Iron Man), Samuel L. Jackson (as the law-enforcement agent Nick Fury) and Scarlett Johansson (the superspy Black Widow); a roster of copyrighted characters that are now loyal subjects of the Walt Disney empire; and a budget of more than $220 million “The Avengers” would seem like the epitome of the blockbuster summer movie: flashy, corporate and above all, big.

“The Avengers” would also seem to be the antithesis of the kind of work Mr. Whedon is best known for. On TV and in films like “The Cabin in the Woods” (which he wrote with its director, Drew Goddard, and which opens April 13) he has subverted conventions of supernatural and science-fiction storytelling and defied the expectations of audiences well versed in them, while working small and on his own terms.

I'm an award-winning journalist in Harrisburg, Pa. I also run and cook all the things.
View all posts by jlmicek →
This entry was posted in action, Box Office Tallies, Film News, Sci-Fi, Summer Blockbusters, Superhero Cinema, The Avengers and tagged Box Office tallies, Joss Whedon, The Cabin in the Woods, The Hunger Games, The Three Stooges. Bookmark the permalink.