From The “Just Because You Can Do Something” File: 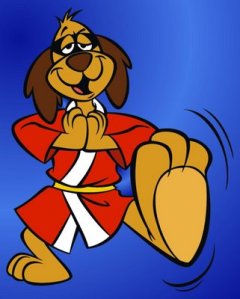 The Wrap reports this morning that comedian Eddie Murphy will lend his voice talents to a reboot of the 1970s Hanna Barbera cartoon “Hong Kong Phooey” which chronicled the adventures of the famed masked crime-fighting pup. The original show featured the late Scatman Crothers in the title role.

To wit:
“Tooth Fairy 2′ director Alex Zamm will be taking on the story about a mild-mannered dog-turned-crime-fighter who finds himself granted the power to walk on his hind legs, talk, and do kung fu.
Voiced by Scatman Crothers in the ’70s television classic, the new “Phooey” will be part live-action, part animation feature.
“We could not be happier that Eddie Murphy will star as Phooey,” producers Andrew Kosove and Broderick Johnson said in a statement. “There is no overstating his contributions to cinema, and to such enduring stars of family entertainments such as ‘Shrek’ and ‘Dr. Doolittle.’”