With the kids heading back to school and Labor Day celebrations just around the corner, I’m already starting to feel pangs of nostalgia for the 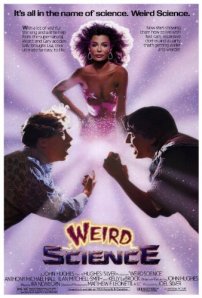 summer that was. And, inspired by fellow WordPress film blogger RaveReader, here’s the Top Five movies that always remind me of the closing days of summer.

Hardly any of the films below qualify as deathless art. Mostly, they are movies for which I have a sentimental attachment. They bring me back to those dying days of summer, when it got cold enough at night to wear a sweatshirt and jeans, and when — if you listened closely enough — you could just about hear the ticking of the clock counting down the days until classes started again.

Feel free to leave your picks in the comments section.

For me, this has always been the last of the classic John Hughes’ teen flicks. Oh, sure, he’d go on to make “Career Opportunities” featuring the young Frank Whaley and an improbably pneumatic Jennifer Connelly. But this Anthony Michael Hall-starrer, set in Hughes’ fictional Shermer, Ill., was the last one to include a member of his repertory company of Brat Pack actors.

Though it’s filled with raunchy jokes and Porky’s style sight-gags, there’s the same sweet heart beating at the center of this movie as in every classic Hughes film. And I defy you not to leave the theater without bearing a crush on the dark-haired dream girl (Judie Aronson) who eventually wins Wyatt’s (Illan Mitchell-Smith) heart.

2. One Crazy Summer (1986).
The second installment in a trio of weirdly wonderful 1980s flicks from director Savage Steve Holland. Known for their quirky animation segments and geeky jokes, Holland burned brightly for three straight summers with “Summer” and “Better Off Dead,” both of which starred John Cusack. The third film of the bunch “How I Got Into College” is largely forgettable.

If you haven’t seen this one, and shame on you if you haven’t, “Summer” focuses on the post-graduate adventures of “Hoops McCann” (Cusack) and his pals on Nantucket as they go through one, last blowout before college. Along the way, they end up saving the home of an aspiring singer (Demi Moore) from a pack of ruthless developers.

The movie also stars comedian Bob “Bobcat” Goldthwait, who basically spends his allotted screentime playing an even more enervated version of his screechy stage persona. There’s a nice turn from Moore, who had yet to become DEMI MOORE, MOVIE STAR, as the sweetly hippie singer Cassandra (who also becomes, natch, the apple of Hoops’ eye).

Again, this is hardly deathless art. But my friends and I are stil able to recite whole chunks of this film (along with “Better Off Dead“) from memory. Holland, in a neat turn, now directs episodes of the ‘tween show “iCarly” so he lives on in our household through my six-year-old daughter.

3. “Star Wars” (1977).
In the summer of 1979, the summer before I started fourth grade, my parents would deposit me, my sister and a carload of neighborhood kids at the front door of the 99-cent theater in the New England town where I grew up, there to spend nearly every Saturday afternoon eating popcorn and having this sci-fi classic permanently imprinted on our neurons.

These were the days when you could still drop off nine or 10 sun-strained and sugar-crazed 9-year-olds at the front door of a theater and leave them there without a: worrying about their safety or b: worrying that some psychotic helicopter parent would sic child protective services on you.

Those were dramatically different days. Now I get nervous if my daughter disappears out of the front yard for more than 10 minutes at a clip. And you can forget about letting her ride her bike the three or so miles to the local mall as my friends and I used to do on endless Saturday afternoons in the early 1980s, when we’d spend hours pumping hard-won quarters into juiced-up Galaga and Pac-Man machines.

4. “She’s The One” (1996).
And we’re back to talented young directors — in this case, Edward Burns — and their shining early work. This was the second of what I’ll call Burns’ “Irish Brothers from Brooklyn” flicks. The first was “The Brothers McMullen” from 1995.

This one follows the romance between Burns’ taxi-driving Mickey Fitzpatrick and the free-spirited Hope (Maxine Bahns) as they get to know each other after a spur-of-the-moment marriage. The family drama also stars John Mahoney, Cameron Diaz and Jennifer Aniston, as well as Mike McGlone (the guy in those insurance ads).

My wife hates this movie. But I’ve always thought it was filled with a kind of romantic hopefulness (do we sense a theme developing here?). It also features a killer soundtrack from Tom Petty and the Heartbreakers.

5. The Thomas Crown Affair (1999).
Didn’t know it at the time, but I saw this movie with the girl who’d eventually become my wife. ‘Nuff said.