Writing in the pages of Slate this morning, Daniel Engber 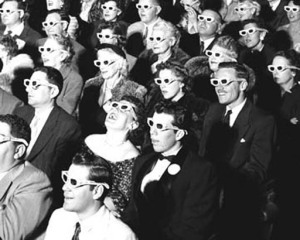 offers four theories for why things went pear-shaped for the 3D revival so quickly.

The piece is yet another warning on the malaise afflicting Hollywood as the nation struggles to throw off the shackles of The Great Recession. It’s definitely worth your time to read.

“An analysis published in Slate last August showed that the patient might already have flat-lined. The profitability of 3-D cinema had dropped since the start of the vogue several years earlier, and more recent films were barely breaking even on their 3-D screenings. Now we’ve got another year’s worth of data—12 months’ more evidence that the medium is in peril. According to a New York Times business story from June, waning enthusiasm for 3-D has brought the vultures circling, with shares of DreamWorks Animation, the studio managed by Jeffrey “2-D films are going to be a thing of the past” Katzenberg, in free-fall. Shares of RealD, one of the big players in stereo projection technology, have also been in a tailspin, losing 70 percent of their value since May.”

What’s always surprised me is the fact that Hollywood thought that 3D held the cure to its ills.

In general, 3D films tend to be more about spectacle than they do plotting and character development. And, in most cases, the 3D is slapped on in post-production, rendering the effects immaterial to the actual action (Oh! Look! It’s Thor’s hammer! Flying straight at me! Whoa!). And it doesn’t matter how you gussy things up. Audiences will figure out that a bad movie is a bad movie, no matter how much CGI or 3D gets slapped on top of it.

That Hollywood got from “Avatar” which was beautifully rendered in 3D to “Shark Night 3D” in less than three years should tell you all you need to know about the dangers of embracing faddish filmmaking.

The filming technique still works well in an iMax setting, where the huge screens really do it justice (U23D remains one of the best-ever concert films for this very reason. You literally feel like you’re onstage with the band during its performance). Audiences have been trained to pay higher prices at iMax theaters. But to ask them to pony up an extra $5 or $6 at the Multiplex just seems offensive.

There was a reason why 3D had a brief heyday in the 1950s. It was kitschy and new. And then died. Why’s anyone surprised that it’s happening again.

I’ve said it before and said it again. If Hollywood stopped with the endless reboots, reimaginings and movies about freaking board games and concentrated on telling new and original stories with characters that audiences actually cared about (See “The Help“), then it might be able to reverse the death spiral.

I'm an award-winning journalist in Harrisburg, Pa. I also run and cook all the things.
View all posts by jlmicek →
This entry was posted in Film News, Golden Age of Cinema, Our Films, Ourselves and tagged 3D glasses, Avatar, Chris Hemsworth, Shark Night 3D, Thor. Bookmark the permalink.