Jason Statham Just Does What He Does.

And, really, how do you fault him for it? 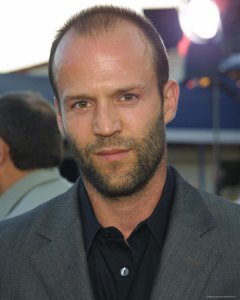 A couple of days after ringing in his 44th birthday, the English action star chats with The Guardian’s Catherine Shoard to do a bit of promotion on his new film “Killer Elite,” which also stars Robert DeNiro and Clive Owen, and above both of whom, we’re informed in the story, Statham receives top billing.

“Statham’s genius lies in repetition. He is to action movies what the Chinese Sung ceramicists were to pots, producing ever more perfect repeat ware with only the subtlest variation over long periods of time. If your beat-em-up act ain’t broke, why fix it?

Time moves one way, though, and Killer Elite is persistently interested in how long Statham’s character can maintain both his ability and stomach for the work. So how long can Statham himself keep it up? His eyes widen. “That reminds me of another film I did! Ha ha ha. As long as it lasts. As long as people keep going. There’s a shelf life for everything, I suppose, but you have to keep people guessing – well, not so much that … As long as you make entertaining films, that’s the goal. And as long as people get their money’s worth they’ll go back, and if they don’t you’ll be on the shelf like many others.”

I'm an award-winning journalist in Harrisburg, Pa. I also run and cook all the things.
View all posts by jlmicek →
This entry was posted in action, Film News, Guy Cinema and tagged action movies, Clive Owen, Jason Statham, Robert DeNro, The Guardian, The Transporter. Bookmark the permalink.