Fox Developing “The Spectre” For TV.

OK, So This Makes Me Happy. 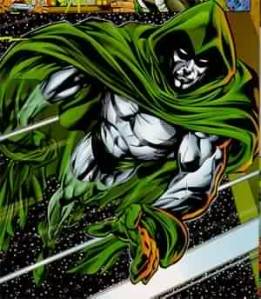 It looks like the suits at Fox are developing a drama series based on the long-running DC Comics character “The Spectre.”

Via NerdRepository, here’s the report:

“A few weeks ago, we reported that DC’s Deadman was being developed by the CW.  Now it looks as though DC might be trying to expand their television catalog, with Deadline breaking the story that The Spectre has been purchased by Fox.  The series “centers on a former cop serving time in afterlife limbo who hunts down earthly criminals on behalf of the dead — and mortals soon to be dead if ultimate justice is not served.”  Brandon Camp will write the adaptation and serve as executive producer.”

For those of you not in the know, The Spectre is one of DC’s oldest characters. He made his debut in More Fun Comics No. 51 in 1940. Though he’s been treated in a number of ways over the intervening decades, in his classic (and best) incarnation he was Jim Corrigan, a slain New York City cop, sent back to earth as the ghostly embodiment of divine vengeance.

In early tales, The Spectre always had a whiff of the supernatural about him. But through progressive stories, he became more of a typical superhero, socking bad guys with his fists and even joining up with The Justice Society of America. Like most of the Golden Age characters, he was mothballed by the end of World War II. And that, one supposed, was that.

In the 1970s, he became the anchoring character for a reinvigorated run of the classic title Adventure Comics. Written by Michael Fleisher and drawn by Jim Aparo, he became a truly supernatural character once again. This Spectre was frightening and took his mission as the spirit of justice seriously. In the stories, evildoers were variously vanquished by being turned into blocks of wood to be run through a band saw or candles to be melted down. The stories had more than a whiff of the old EC horror comics about them.

A mid- to late-1980s run, written by Doug Moench, had its moments. But the character found its fullest flowering in the hands of the amazing John Ostrander and artist Tom Mandrake. Their Spectre  focused more on Jim Corrigan, who was tormented by his mission and wrestled with questions of good and evil, whether his mission would ever be truly successful and what it meant to be faithful. Their 1990s run on the book even ended with Corrigan finally finding rest — after learning that his true mission was to understand evil and confront it, not to vanquish it — and going on to the afterlife.

In the intervening two decades, The Spectre’s mantle has been variously taken up by Hal Jordan (The Green Lantern) and a Gotham City police detective named Crispus Allen, who agreed to become The Spectre to avenge his slain family. The Allen Spectre was intriguing, but it never felt as if DC was giving the character its due.

To be fair to DC and the writers, The Spectre is an unbelievably difficult character to write and sustain over a prolonged period of time. In a lot of ways, he’s just like Superman. How do you present credible threats to a being that’s the earthly manifestation of divine justice? The answer, as Ostrander demonstrated, was the focus on the Spectre’s human host and the awesome responsibilities that role presents.

It’ll be interesting to see how/whether DC decides to use The Spectre in its newly rejiggered continuity. With a new Justice Society book reportedly due to bow in 2012, he’d be a perfect fit. But then, I’ve always had a softspot for Old Moonface, as he’s been known in the funny pages.

I'm an award-winning journalist in Harrisburg, Pa. I also run and cook all the things.
View all posts by jlmicek →
This entry was posted in action, Film News, Superhero Cinema and tagged DC Comics, DC Comics The New 52, John Ostrander, Justice Society of America, new Spectre show on Fox, superheroes on TV, The Spectre, Tom Mandrake. Bookmark the permalink.