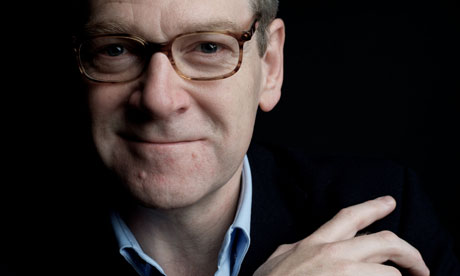 Kenneth Branagh, photo from The Observer of London.

The Observer’s Elizabeth Day …
… speaks with the director and filmmaker upon his return to his home turf in Northern Ireland. It’s a fascinating read about a very talented artist and actor.

“Branagh’s return to Belfast has been poignant for many reasons. There is the sense of homecoming, of reconciling himself to the things that have changed and the boyhood he left behind. When the Branaghs left for England in 1970, the Troubles were just starting; a year previously, the battle of the Bogside between Catholic residents and loyalist marchers in Derry had been quelled by the British army. Now, four decades on, the province is at peace, more or less, and Branagh has come back to a very different homeland.

“There’s a much stronger sense that Northern Ireland is more part of the world now,” he says. “I used to get the sense that there was a kind of slight siege mentality for whatever reason, a slightly chippy thing going on sometimes. But it feels there’s a very, very positive energy about the place.”

Having turned 50 last December, he is at a particularly contemplative stage in his life. “You’re looking in two directions. I feel as young as I’ve ever felt but at the same time, I’ve got a 30-year career now and I’m looking back across that and one sees… one just wants, very much, to make the most of things whether it is that bun” – he gestures at an enormous raspberry and white chocolate scone on the table – “or the show or whatever it is.”

I'm an award-winning journalist in Harrisburg, Pa. I also run and cook all the things.
View all posts by jlmicek →
This entry was posted in Film News, Our Films, Ourselves, Shakespeare On Film, Thinking About Movies and tagged Belfast, Emma Thompson, Henry V, Kenneth Branagh, Much Ado About Nothing, Northern Island, Othello. Bookmark the permalink.