The Viewers’ Guide To “Midnight In Paris.” 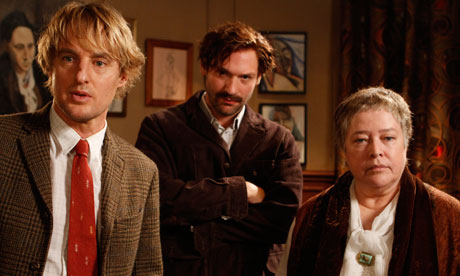 Owen Wilson with Corey Stoll as Ernest Hemingway and Kathy Bates as Gertrude Stein in Woody Allen's "Midnight in Paris."

Filmmaker Woody Allen earned plaudits earlier this year with “Midnight in Paris,” his love-letter to the City of Lights in the 1920s.

Figures of 20th Century Modernism, such as Ernest Hemingway and F. Scott Fitzgerald figure heavily in the film. But if you’re not a specialist, or if it’s been years since you read them in a college lit class, you’re probably scratching your head over their significance.

Well scratch no more. The folks at The Guardian have put together a handy cheat-sheet to these folks and explained where they fit into the grand cosmos of literature. But if you don’t already know, really, you should.

“Ernest Hemingway needs no introduction if you see the film because in it he speaks as he writes, in bold, authoritative sentences that contrast hilariously with hero Owen Wilson’s flaccid Californian English. It was Hemingway who truly created a modern American voice in literature, tough, heightened yet direct, and he had to go to Paris with its bohemian freedom to do it. In his first scene in the film he asks Owen Wilson if he can box – Hemingway was a man’s man – and he is last seen, drunk, pleading for someone to fight him.”