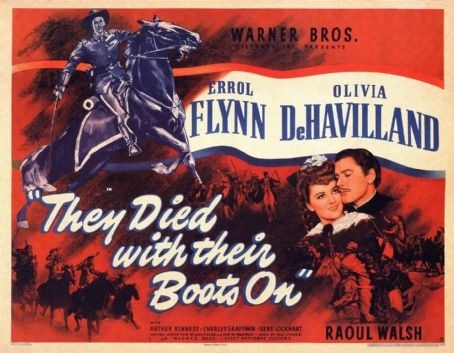 Equal parts Hollywood Cowboys-and-Indians flick; big-budget romance and patriotically appropriate reappraisal, Raoul Walsh’s “They Died with Their Boots On,” looks at the life and times of George Armstrong Custer, the now-mythic cavalry commander who fell at the Battle of Little Bighorn in 1876.

Errol Flynn brings his trademark insouciance and flare to the title role, playing Custer, who’s still a polarizing figure, as a buckskin and fringe version of his Robin Hood from “The Adventures of Robin Hood” just four years before.

Walsh’s sprawling, nearly three-hour-long adventure takes in the lengtth and breadth of Custer’s career, from his entrance at West Point in 1857 to his horrific end at the hands of the Sioux and other tribes in South Dakota’s Black Hills.

While it works well as epic adventure — there’s no shortage of gun fights, sabers-drawn cavalry charges and soft-focus moments between the two stars — “They Died With Their Boots On” fails as a piece of history.

The film’s historical inaccuracies have been exhaustively chronicled, so I’ll only share a few here:

According to a catalogue of gaffes on the film’s IMDB entry, “Boots” shows Custer and his future wife Elizabeth “Libby” Bacon (DeHavilland) meeting while Custer is still a cadet at West Point, This would have been hard to do, since the two did not meet until 1862, nearly a year after Custer left West Point.

One of the film’s central points: Custer’s claim that there was no gold in the Black Hills was incorrect. IN 1874, he led an expedition that discovered gold in the region.

The film also shows Custer and Sitting Bull (Quinn) meeting to negotiate peace terms. While an undoubtedly dramatic moment — it shows Custer acting with nobility on behalf of a government that routinely broke its promises to native tribes — the two never met each other face to face,

The historical inaccuracies also fall agains the backdrop of the film’s undeniably racist caricaturing of both Crazy Horse — who Quinn has speak in obligatory Hollywood Indian monosyllables — and Hattie McDaniel as DeHavilland’s African-American maid.

Nonetheless, as a piece of epic filmmaking, “They Died With Their Boots On,” still works.

All the critical ingredients of the epic are there: The film is replete with sweeping shots of the American prairie (substituted here by the canyons of Southern California). There’s a stirring score from Max Steiner Add to this Flynn’s undeniable personal charisma and the obvious chemistry between him and DeHavilland and it’s a guaranteed win for Warners.

It’s also important to remember that the film was released in 1942, a time when Americans found themselves enmeshed in wars in Europe and the Pacific. So a heroic portrayal of a mythic figure from the country’s then not-too-distant past was just the thing to buck audiences’ morale.

So with “They Died With Their Boots On,” give Hollywood an “A” for storytelling, but an “F” for its remembrance of history — a problem the nation continues to struggle with. 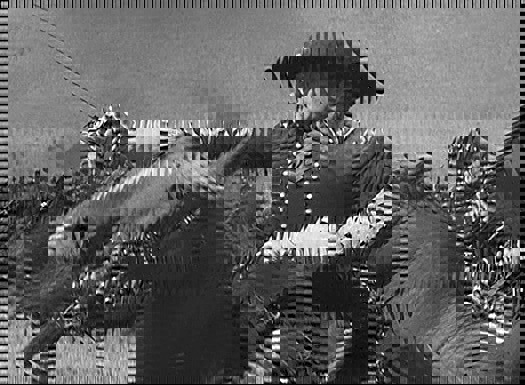