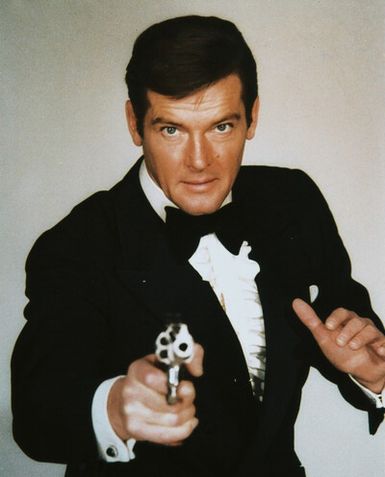 The Guardian Has A Great Interview …
… with former “James Bond” actor Roger Moore. The newspaper finds the 84-year-old thespian in fine fettle. And he remains as dryly funny as he was when he had a license to kill in the 1970s and 1980s. Moore’s last turn as 007 was in 1985’s “A View to a Kill,” which is chiefly memorable for its Duran Duran-penned theme song and precious little else.

“Q: What got you started?
A: A toga. I’d lost regular employment as a cartoon animator, so some friends who were doing crowd work on films told me to come and join them on a film called Caesar and Cleopatra. I was dressed up in a toga, given a spear and gold sandals, and stood with 2,000 others. Later, the director approached me, and asked whether I would consider training to be an actor.”

I'm an award-winning journalist in Harrisburg, Pa. I also run and cook all the things.
View all posts by jlmicek →
This entry was posted in action, Film News, James Bond and tagged A View to a Kill, Duran Duran, Grace Jones, James Bond, Roger Moore, Tanya Roberts. Bookmark the permalink.