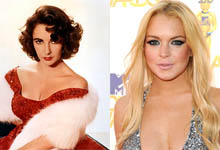 One of these things is not like the other (HeyUGuys, photo)

You’ve got to hand it to the star-crossed actress, she does have an appreciation for classic Hollywood. First she channeled Marilyn Monroe for her recent Playboy spread. Now this:

“Today, Deadline [is] reporting that Lindsay Lohan is in talks to play Elizabeth Taylor in the new movie, Elizabeth & Richard: A Love Story which focuses around the love affair between Elizabeth Taylor and Richard Burton. It sounds to me like their relationship would have ended up in various gossip magazines if it were to happen today but according to Deadline, their relationship was one of ‘the most fiery romance was the most notorious, publicized and celebrated love affair of its day’, alas I’m not too up to date with Hollywood relationship gossip from the 60s and 70s.”

The blonde hair will have to go, of course. But I’ve always thought Lohan was prettier with her real red hair, anyway.

I'm an award-winning journalist in Harrisburg, Pa. I also run and cook all the things.
View all posts by jlmicek →
This entry was posted in Femmes Fatale, Film News, Golden Age of Cinema, Screen Sirens and tagged Elizabeth Taylor and Richard Burton, Lindsay Lohan, Lindsay Lohan in Playboy. Bookmark the permalink.