Is Rooney Mara Using Fashion To Wage An Oscar Bid? 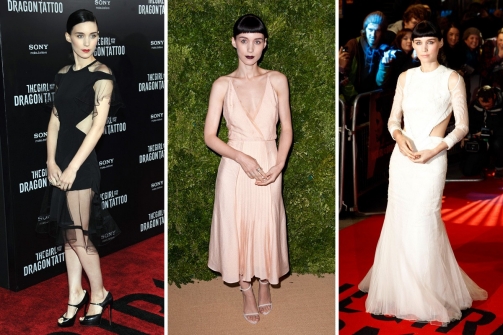 That’s the intriguing question posed in The Daily Beast this morning about the “Girl with the Dragon Tattoo” star, who’s been turning heads across the globe with a series of striking red carpet outfits.

“Since she graced the cover of Vogue in November, one thing has been clear: Rooney Mara is a fashion force. In her public appearances, her aesthetic is dark and edgy, usually a little revealing, and always extremely sleek. It’s a long way from the baby-doll pastels, ruffles, and prints she wore as late as 2009.

If Salander were forced to do red carpet appearances, this, surely, is what she would wear. The Prabal Gurung dress Mara wore to the New York premiere had, according to the designer, “a feminine appeal but the overall look showed such strength and depth…much like the character she plays in the film.

In a way, Mara seems to be quietly running an Oscar campaign through her fashion. The Academy loves personal transformation (see Charlize Theron inMonster) and ingénues (Ellen Page in Juno). Through her fashion choices, Mara appears to embody her character in a permanent campaign, which could appeal to the Academy’s sensibilities. But veteran stylist Jessica Paster says appearing too fashion-forward in the carefully styled world of Hollywood is a risk.

“When you dress too edgy, Oscar people don’t get it,” she said. “When someone is an up-and-comer, [stylists] often try to make her into a cookie-cutter starlet. It’s nice that people are allowing Rooney to be herself.”

I'm an award-winning journalist in Harrisburg, Pa. I also run and cook all the things.
View all posts by jlmicek →
This entry was posted in drama, Film News, Film Noir, Thinking About Movies and tagged Daniel Craig, David Fincher, film and fashion, Rooney Mara, Rooney Mara on the red carpet, Rooney Mara's red carpet style, The Girl With The Dragon Tattoo. Bookmark the permalink.