Idris Elba Will Return For “Thor 2” 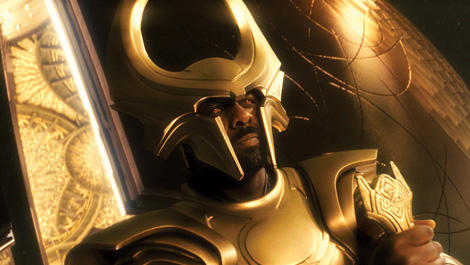 … but you won’t be seeing the Englishman in “The Avengers,” he tells TotalFilm:

“A couple of tidbits of casting news concerning Thor 2 for you today, with Idris Elba confirming that he will reprise his role as Heimdall, the towering guardian of Asgard’s rainbow bridge Bifrost.

When asked about his involvement in any future Marvel projects, Elba responded “Thor 2, for sure,” before going on to elaborate, “we’re going at it again.”

Elba went on to admit that he had yet to meet with new director Alan Taylor, and also confirmed that he hadn’t been at all involved with The Avengers, scotching rumours of a potential cameo appearance in that film.

Elba’s news comes hot on the heels of Jaimie Alexander confirming that she will also rejoin her Thor buddies to reprise the role of Sif, Thor’s childhood sweetheart.

I'm an award-winning journalist in Harrisburg, Pa. I also run and cook all the things.
View all posts by jlmicek →
This entry was posted in action, Film News, Sequel-Itis, Superhero Cinema and tagged Chris Hemsworth, Idris Elba, Jaime Alexander, The Avengers, Thor 2. Bookmark the permalink.