The Story Behind “The Empire Strikes Back.”

Via FlickeringMyth, here’s an inside look at the best film in the original “Star Wars” trilogy. 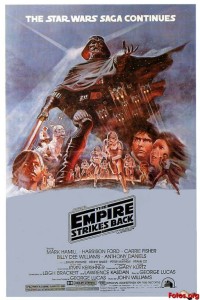 The report, from TotalFilm, sheds some fascinating light on the film, including the reasonable fear that director George Lucas might not be able to twice capture lightning in a bottle:

“Everybody knows about the ‘curse’ of the sequel,” [Mark Hamill [said] in 1978. “But I think that Star Wars is a little bit different. It was not, for instance, the intention of the people who made Jaws to make a sequel.

“The intention with Star Wars was to make it a series right from the beginning. It all started with three films in mind. [George Lucas] set the stage… he set up a galaxy far, far away. Now he can go in many different directions.”

The piece is well worth your time.