Him Tarzan, She Was Jane: Actress Eve Brent, RIP

Character actress Eve Brent, who was best known for playing 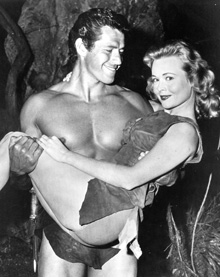 Jane opposite Gordon Scott’s Tarzan in some late 1950s features, has died, the New York Times reports this evening. She was 81.

Brent died Aug. 27 in Sun Valley, Calif. She played Jane in the features “Tarzan and the Trappers” and “Tarzan’s Fight for Life.”

Her later roles included appearances in feature films such as “The Green Mile” and television shows such as Roswell, JAG and Scrubs.

From The Times’ obit:

“Ms. Brent rebooted the character of Jane, Tarzan’s civilized love interest, in the 1958 films “Tarzan and the Trappers” and “Tarzan’s Fight for Life,” after Jane was left out of the two previous Tarzan movies. She said she took the part to please her son, who was around 6 at the time. But although it raised her profile, she later concluded that it had been a disastrous career move.

‘I really couldn’t get work as an actress because of Jane,’ Ms. Brent told a Tarzan fan site in 2007. ‘You get stereotyped, at least in the business at that time.'”

I'm an award-winning journalist in Harrisburg, Pa. I also run and cook all the things.
View all posts by jlmicek →
This entry was posted in Film Bits, Golden Age of Cinema and tagged Eve Brent, Gordon Scott, Johnny Weismuller, Maureen O'Hara, Tarzan. Bookmark the permalink.