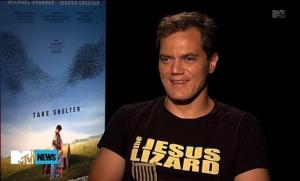 “I’m still getting my foot into the pool, you know? I just started working on it and all I can say is it’s very well written and there are a lot of great opportunities to reinvent it for myself. The challenge is for me to do that.”

If Shannon looks familiar, that may be because you’ve seen him on HBO’s Boardwalk Empire.

Elsewhere, ComicBookMovie has an exclusive clip from next week’s “Thor” Blu-ray DVD release showing how the filmmakers brought the Frost Giants to life on the big screen. Sadly, it’s not embeddable. Grab a look before the copyright lawyers pounce.

And here’s a set video from “The Dark Knight Rises” from shooting in Los Angeles. According to IO9, this is supposedly the compound for the film’s villain, the monstrous Bane. But you can never tell about these things.