Spielberg To Get His Moses On With “Gods and Kings.” 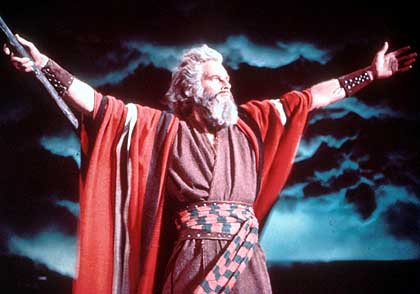 The folks at /Film report that the famed director is nearing a deal to shoot what’s being described as a “gritty” reimagining of the Old Testament tale of the Israelites’ exodus from Egypt:

“Gods and Kings would follow Moses from his adoption in infancy to the acquisition of the Ten Commandments. It is written by Stuart Hazeldine (Paradise Lost) and Michael Green, a writer on Green Lantern and TV show The River.


Reporting on the project, Deadline emphasizes that Gods and Kings is not being developed as a 3D film. That shouldn’t surprise anyone who has been paying attention to Spielberg’s recent comments about film and 3D. He has said he’ll continue to shoot live-action on film until the last lab is closed, and unless he wanted to post-convert a project, that precludes using 3D. (Shooting native 3D requires the use of digital cameras.)

Spielberg’s schedule wouldn’t clear until 2013 to begin working on the project, /Film notes. Presumably it would look a whole lot different from the Cecil B. DeMille holiday standard “The Ten Commandments.”

I'm an award-winning journalist in Harrisburg, Pa. I also run and cook all the things.
View all posts by jlmicek →
This entry was posted in Books On Film, Film News, Hollywood and History and tagged Charlton Heston, Edward G. Robinson, Exodus, Gods and Kings, Moses, Steven Spielberg, The Ten Commandments. Bookmark the permalink.